Our trip to Hopiland was fruitful – literally!

We arrived in Kykotsmovi village in Hopiland to visit Danielle, the only full-time Tribal Winds staff member who actually lives directly on the reservation among the Hopi. Danielle became a foster mother to two Hopi daughters two years ago, so her days are spent raising her daughters and working with local youth as well as visiting and praying with community members. She has lived in Hopiland for about six years.

Many Hopis consider her a light to Hopiland, maybe because she has beautiful blonde hair and a contagious smile. She is always so bubbly and beautiful, and she is like a house on a hill in a land that often seems very dark.

Tribal Winds staff member Danielle (center) at home with one of her Hopi foster daughters. It was Danielle’s birthday! Her other daughter was in school. On the right is our base director, Millie.

I am a bit jealous that Danielle was called to live in Hopi. I have struggled with being called to Flagstaff, just outside the reservation, until God told me that He set us on this mountaintop, not in Hopi, for His purposes. That purpose is to help with the Discipleship Training School and the jail ministry.

Much preparation is needed around the base before DTS begins in January 2013. Some of that preparation includes getting on our hands and knees and chipping in where we sometimes forget is necessary. Everyone helps on base. Jaynee helped pull weeds and build a storage shed this week.

I have been helping our base director Will with the bookwork.

God has Reasons for Everything

Our base directors, Will and Millie, lived in Hopi for 10 years before leaving the reservation and establishing the Flagstaff base, where we are now. Millie explained that six years ago she and Will were leading many successful ministries in Hopiland, but one day God told her that it was time to leave because God wanted the Hopis to be able to lead their own ministries. Those attending the Bible studies and church services were becoming dependant on the Toms’ leadership and not discipling each other on their own. So, God brought them to the Flagstaff base to continue the DTS to disciple Hopis and others and send them back to their native lands to disciple their own people. I love how faithful the Toms are in listening to and following Gods direction. I know they had a hard time leaving their home and their friends. I would have had a hard time, too.

Fruits of Their Labors

When we visited Hopiland, it was awesome to see the fruits of the Toms’ labors. We not only visited and prayed with many of their Hopi friends, but we literally came home with a trunk full of fruit!

We stopped at the Toms’ old house in Kykotsmovi, where a Hopi woman and her family now live. When we pulled up, Millie squealed with excitement as she saw the apple tree she planted more than 15 years ago full of apples! She said this is the first year the tree has produced any fruit. She climbed up into the tree and picked hundreds of sweet apples! They were tiny but so good. We gave two sacks full to the woman who lived in the house and brought home two more sacks full. My girls took many to school to their friends and teachers. We shared some with our neighbors, and we made the rest into apple banana muffins, which we distributed to whoever would take a handful! They were so yummy!

As we were grating the tiny apples and the sweet smell was drifting around the room, I thought of how this fruit represented the work the Toms and others have done in Hopiland for the past 16 years. The fruit took a while to grow, but it is steadily growing now, set in a solid foundation, and so very sweet! God is good!

Apples, apples everywhere! Millie picked hundreds of apples, and we gave some to Serena (second from right) and shared some with Skip (sitting), who rode back to the base in Flagstaff with us.

We later stopped in the village of Palacca to visit Mayo, a Hopi who just completed DTS and is now ministering to dozens of Hopis in his own village. As soon as we pulled up, Mayo began pulling bunches and bunches of beautiful green, ripe, juicy grapes off a vine in front of his house. Here we were in the middle of the desert, and before us grew a beautiful grapevine with the sweetest grapes I’ve ever tasted! God has blessed Mayo and his family for being faithful.

Mayo (right) and his Auntie Edna, who loves to make her beautiful pottery as she listens to Indian worship music. It was a beautiful sight to see Edna working on her pottery, and it was awesome listening to her and Mayo pray to our great Creator in their native Hopi language.

I can’t wait to meet our next group of students who will attend DTS, which begins January 31, 2013. We have much to prepare between now and January. I had a rough first couple weeks, but the last few days I have woken up anxious to see what God has planned for the day. No matter what it is, it is always good! 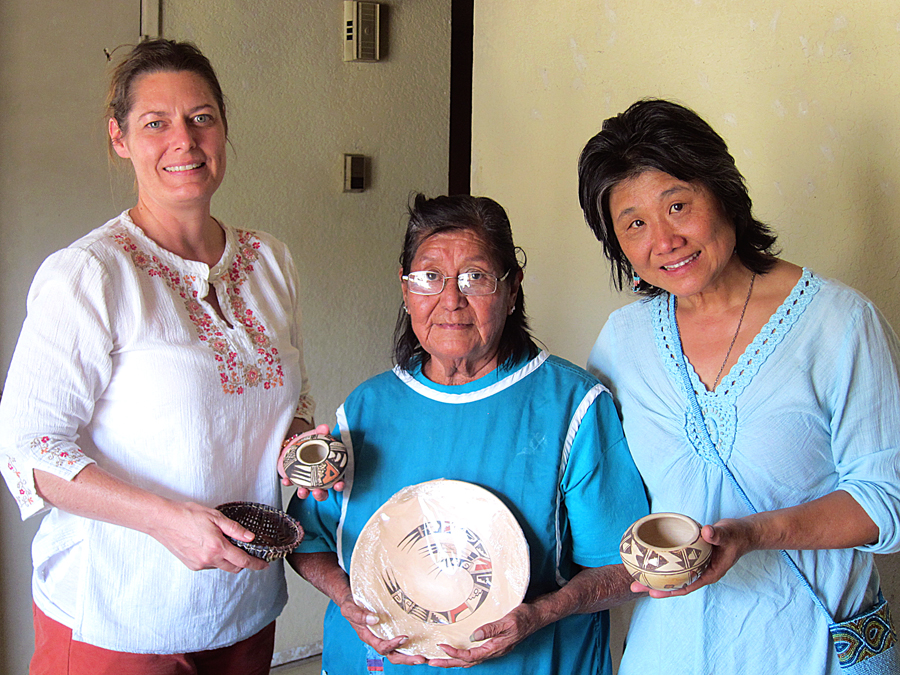 Auntie Edna showed us several of her beautiful pottery pieces and explained how she travels many miles on the reservation to dig the clay by hand. She then brings the clay home and shapes it into beautifual pottery pieces, dries them and paints them with yucca leaves dipped in handmade dyes. All the dyes are made of natural substances. The recipes used to created the dyes are considered sacred and are known only to the Hopis. Edna gave us big Hopi hugs as we left. What a sweet lady! I can’t wait until our next visit.

Do you have a heart for Native America? Would you consider a one-time donation or a monthly sponsorship? Visit our Sponsor Us page to see how your sponsorship dollars strengthen the mission field for Hopi people in North America.

1 thought on “Fruitful Visit to Hopiland”