I brought roasted pumpkin to work this morning.

My first taste of Thai pumpkin was last year in a tippy-top mountain village of the Karen Hilltribe. The Karen grow pumpkins and sell them as their main source of income.

Now, pumpkin in Thailand looks nothing like pumpkin in America. It’s green and warty. To describe it nicely, it looks gross.

So when our hilltribe host offered me a slice with a sprinkle of sugar on top, I wanted to wrinkle my nose and run away screaming, but the rule of thumb when visiting people on any outreach is, “If they offer it to you, eat it.”

So, this morning when I walked into the office with a bag full of roasted pumpkin slices and my colleague wrinkled his nose at the sight of it, I challenged him to a taste test.

This guy has eaten plates full of cockroaches and sat right beside me a few weeks ago in a restaurant and purposely ordered fermented fish, but when I told him to try the pumpkin he made the face your kid makes when you tell him he has to take three bites of his vegetables.

He did man up and try a piece. Of course, he thought it was delicious. He said he never thought anything so ugly could be so tasty.

The ugly pumpkin actually reminded me of our latest outreach to the city of Lamphum in Northern Thailand.

We left Friday morning on a wing and a prayer. We didn’t have a plan. Everyone we had tried to contact either canceled or didn’t answer. We did, however, finally get a hold of one pastor, who agreed to let us show our Northern Thai film in front of the church, which was essentially a small store front.

We put together some invitations, canvased the neighborhood, and did some other crazy stuff – like recording a message on a megaphone and blasting it from the back of a pickup while driving around town. You can watch this short clip (It’s dark. Sorry.) of the things we’ll do to get people to our movie showings:

We really didn’t know if anyone would show up, but when we returned from embarrassing ourselves with the bullhorn, almost every seat was full!

Included in the crowd was a group of guys we invited from the bar down the street. They sat in the back row. I watched them as they watched the movie.

They laughed and nudged each other during funny parts. They quieted down during the more serious parts. I wondered how long they would stay. One guy got up to smoke a cigarette, and I figured we had lost him. Instead, he just smoked right behind the crowd and never took his eyes off the screen.

I think those guys in the back were our ugly pumpkins. They didn’t accept Jesus that night, but they sure did seem happy about being there, and they made me smile just watching them.

They also witnessed three people who did accept Jesus that night! I know seeds were planted – maybe ugly pumpkin seeds? They are often the best kind!

The next day we received permission from the village police chief to show the film at the local market in the center of town.

Our original plan was to show it at a remote location for the Kachin people of Burma.

That night following the movie, a man who had never even heard of Jesus until he watched the movie, accepted Jesus as his Savior.

I watched as he prayed to God for the first time in his life. When he said, “Amen,” his hands began shaking, tears formed in his eyes … and he smiled so peacefully.

He said his wife and children had left him, and he was desperate to get them back. I felt God took us to the market that very night just to reach that man.

— We have officially accepted 10 students from four nations for the upcoming Discipleship Training School! Eight of those students are from unreached people groups. Those students, plus two more applicants, are from third-world nations. Wow. It really puts life into perspective when students from these places say things like, “Can I e-mail you my paperwork because mailing them is not safe.” Makes my heart break. Please keep these students in your prayers for safe travels and God’s divine mercy as they make their way to Thailand.

— We have stepped out in faith this month by inviting one of our Thai friends to live with us. Neena has a heart to reach her own people right here in Thailand, but she is just beginning her journey in raising support for her ministry work.

When I heard Neena needed a place to stay, I kept feeling that gentle nudge from God to offer her our extra room. Oh, that nudge! It’s subtle, huh? But so persistent! And it couldn’t have come at a harder time.

Last month we lost a faithful supporter due to a financial hardship. Our support has been cut nearly in half. I told God we could not possibly help Neena at this time; we have had to make cuts in places I didn’t think could be cut. God kept reminding me, however, of how He has taken care of us all this time.

Sunday, we welcomed Neena into our home, and I know God will fill the gap that has caught us a bit by surprise. We will not be swallowed up by that gap because Jesus stands firmly in it for us! I feel it is God’s way of creating opportunity for others.

I quoted from a friend’s blog a couple weeks ago, “Generosity isn’t really a naturally-occurring tendency but a God-inspired phenomenon.”

If you or your church has been praying about joining our support team, now is a great time to do so. 🙂

Even if you can send $25 a month, you make a vast difference in our ministry.

We have one supporter who faithfully sends a $25 gift on the 2nd day of each month. That $25 pays our lodging for two, sometimes three, nights during our monthly outreaches. $25 makes a huge impact in a country like Thailand.

I want to thank our supporters who help make our ministry a success and ask others to pray about joining us in this way.

If you feel God is asking you to support our mission, you can do so in one of three ways:

Bless each and every one of you. We are so blessed to be here, and I already can’t wait to write to you again!

Here are a few photos (OK, a ton of photos) from our outreach to Lamphun. You can click on one to make it bigger, and then play the photos in a slide show. 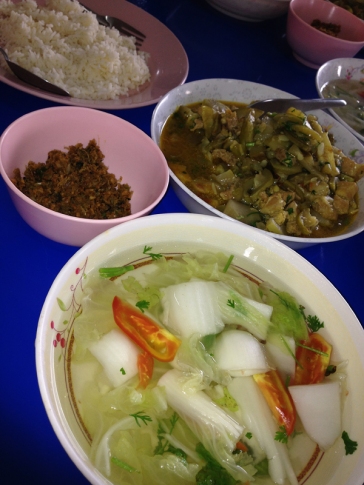 YWAMers don’t need ladders! We have a Jeff!

Toilets in the museum. No, we don’t use these over here, but apparently, someone used to! These were probably fancy toilets for a king or something. I couldn’t read the sign because it was in Thai. Boy, I need to learn Thai a lot faster! 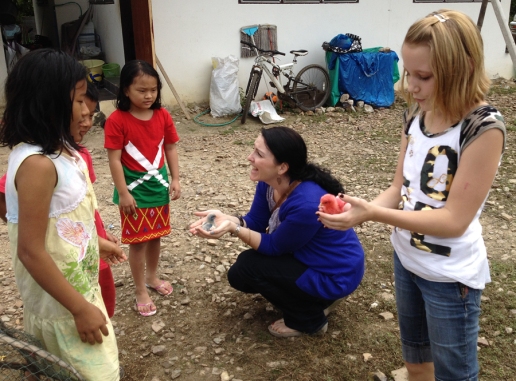 I can’t remember the name of this temple, but it is featured on the back of the 25 satang Thai coin.

This guy was walking by as we were stopped in a parking lot trying to find the church. He was an artist. He spoke very good English, and we all had a great conversation with hiim. He gave the girls some coloring pens. The portrait he is carrying was a picture he was drawing of Rama 5 (King of Thailand). 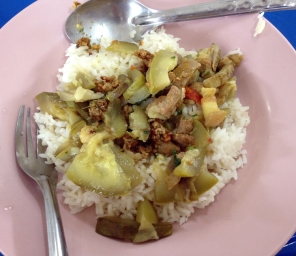 Burmese lunch! Squash with pork and a flaming hot peanut paste. So good! 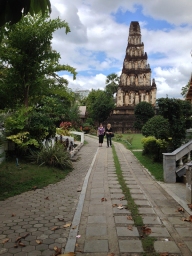 Two of our team members prayer walking on the temple grounds. 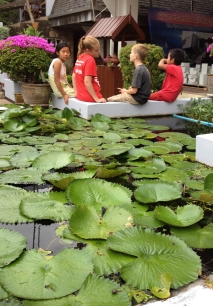 A serious discussion by the lily pads. 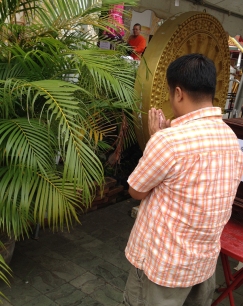 A man praying to a tree at the temple. He has 20 baht in his hands. 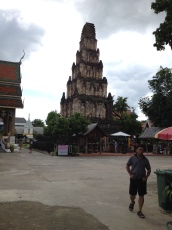 Again, I don’t know the name of this temple, but this monument is called a chedi. One of the queen’s ashes are buried inside.

Jaynee playing with a new friend and her blue baby chick. 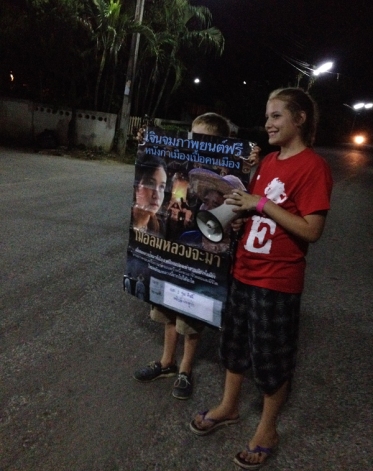 Promoting our film showing through the streets of Lamphun.

A female monk feeding the dogs at temple.

A tuk tuk. We don’t see these “man-powered” tuk tuks in Chiang Mai much anymore. They are all motorized in the city. But we saw hundreds in Lamphun. In fact, we didn’t see any motorized tuk tuks, but we did see lots of skinny men with huge calf muscles peddling people around town! 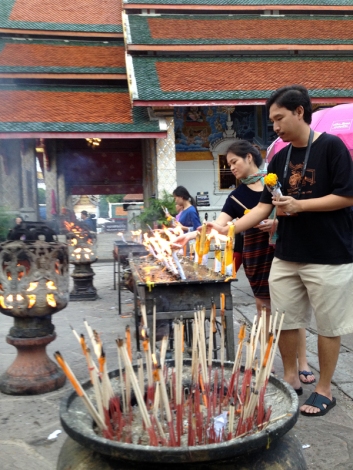 A corner at the gold temple.

Buddha face in a historical museum, where we prayed. 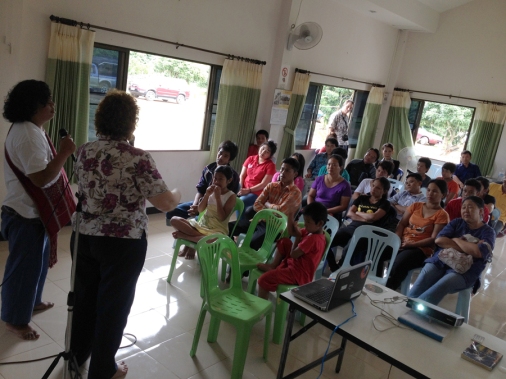 Presenting the Create Burmese film to the Kachin of Burma. 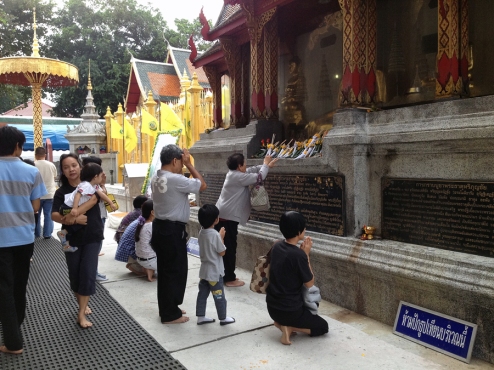 Making an offering at the temple.

Buddha face in a historical museum, where we prayed.

A line of mats inside the temple building.

Praying at the temple for God to reclaim his land. 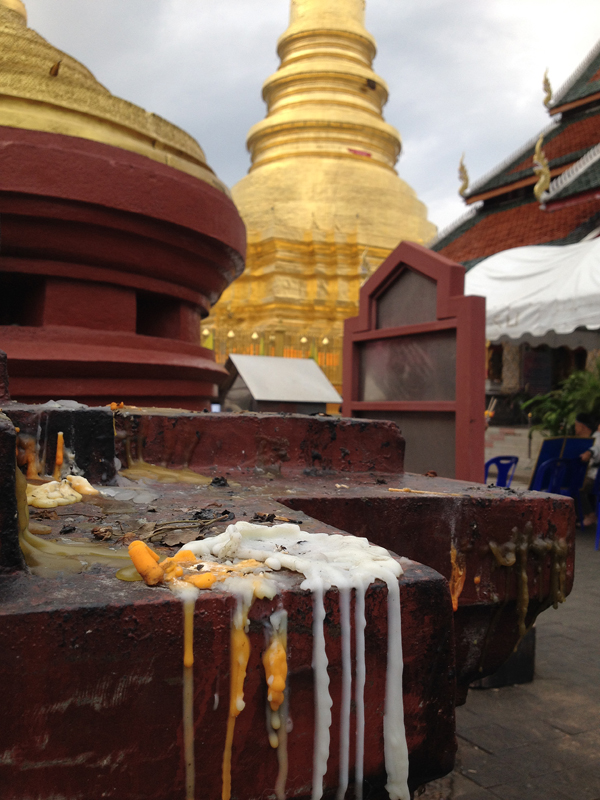